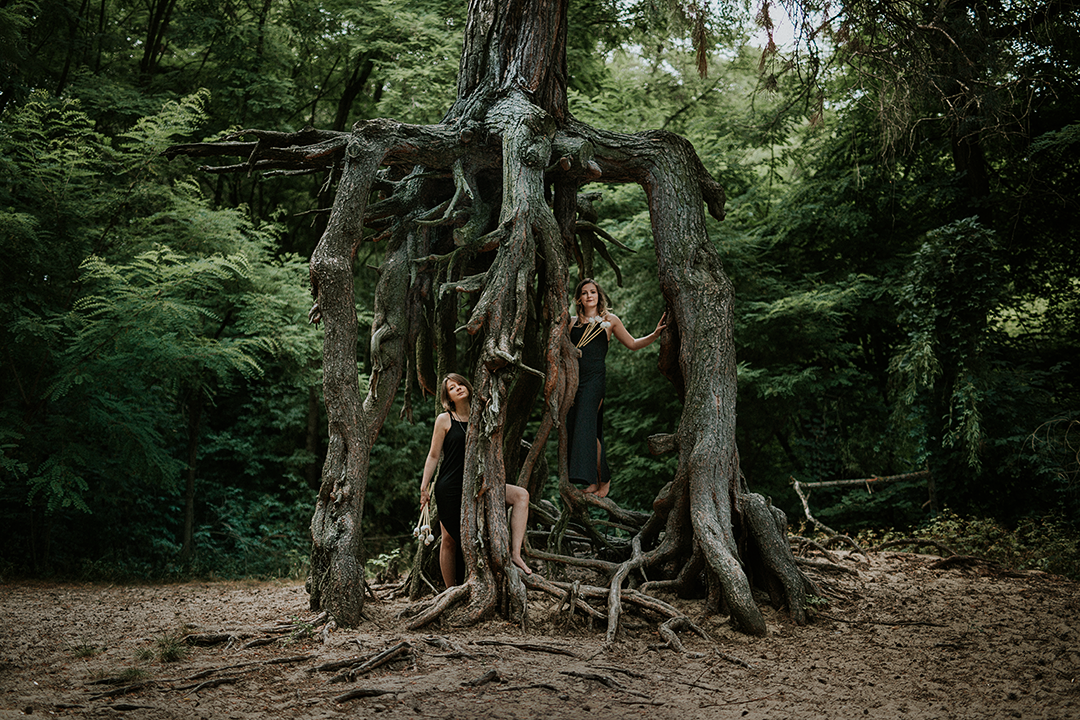 Dalbergia Duo (Anna Rutkowska & Julianna Siedler Smuga) is a unique female marimba/percussion duo from Poland, whose performances are filled with a mixture of sensitivity and elemental women’s power. These two marimba ladies put together on stage create multitude of colours and picturesque musical landscapes.

Dalbergia Duo perform a variety of musical styles and genres including both pieces already written by great world known composers of classical and contemporary music, and those commissioned by the Duo. They actively cooperate with composers of the young generation, building new sonic vocabulary for marimbas. They also give new life to the “classics” written for other instruments inter alia piano compositions by Polish masters Karol Szymanowski or Ignacy Jan Paderewski.
There are no performing boundaries for Dalbergia Duo.
Apart from the classical repertoire the artists deal with contemporary performative compositions
with audio-visual layers, as well as theatrical works.

Julianna and Anna are both active members of Marimba Festiva – International Marimba Association. The Duo actively runs marimba masterclasses and workshops inspired by their percussion passion to the younger generation.

At the end of 2019 Dalbergia Duo released their successful, debut CD Concept Album “Roots”, which contains Polish music written and arranged for two marimbas.
Most of The CD repertoire was written for Dalbergia.

While contemplating our existence, when our beloved come and go, beginning and the end of our lives there is a moment of inner research on „who am I”? Like Gaugain’s painting „Where do we come from? What are We? Where are we going?” we want to find the answer and it comes in form of our „Roots”. Everyone has these moments of reflection and searching for their owns. Who are we as human beings, family members, artists? What is close to our hearts and has been there since we can remember? Which sounds define us? Is our Polish temperament, honesty, hospitability, reflecting on outside world, sensitivity to nature coded in our genes? To find the answer to those questions we need harmony and life stability deriving from self-consciousness. Dalbergia has found this inner-self in sounds of Polish compositions.
We cannot live without music. We are touched by both experimental and traditional music, which are present in our music life all the time. These musical colours we do understand and we do love. We want to share our Polish music with the world – reminding at the same time where our roots are and presenting our nature – „Roots” of Dalbergia.

Piano miniature by I.J. Paderewski written in 1886 as a part of the Humoresques op. 14, published in 1887. Composed as a joke for one of Paderewski’s friend, who was keen on Mozart’s music. It was arranged for two marimbas by a German composer and arranger Peter Klemke.

First composition for two marimbas written by famous Polish composer and percussionist – Marta Ptaszyńska. Scintilla stands for a spark, particle, flash, transcendent element from outer world. This is one of the most recognizable Polish marimba duo piece.

Root of joy and happiness

Trembling leaves is a musical reflection on evanescence and fragile nature of living. It complements and closes the first work on this album (Seedling), bringing back its’ main motives in a new context.

“Rutkowska and Siedler-Smuga have specialized in getting used to the unbridled nature of the percussion instrument – the seeds are already sprouting, sprouting roots, now it’s time to nurture this plant.”
Wioleta Zochowska

“Roots” is not only an artistic pearl, but also a disc that could boldly aspire to be an audiophile edition. (…) ”
Piotr Iwicki